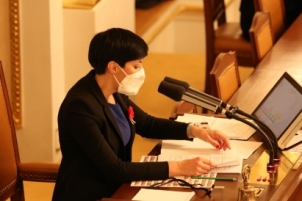 Pekarova's candidacy was proposed by the Together alliance of the Civic Democrats (ODS), Christian Democrats (KDU-CSL) and TOP 09, which has been negotiating on forming a majority cabinet with the Pirates/Mayors and Independents.

will begin on December 15

will begin on December 14

Actual List of EU Documents to be discussed at the Committee on European Affairs:

The Information Centre of the Chamber of Deputies has published several factsheets covering various issues of Czech Parliamentarism and politics:

The Mandate and Imunity of Deputies (FR / DE)

Parliamentary Control of the Government in the Czech Republic (FR / DE)

The Legislative Process in Parliament - scheme

The next plenary session will start on December 14

performs scientific, research, and training tasks for both Chambers of Parliament, for Parliamentary Committees and other sub-bodies, Deputies, Senators as well as for the Chancelleries of the Chamber of Deputies and Senate.

Parliamentary documents (stenographic records, documents, parliamentarians, resolutions etc.) from today going back to 1848 and back to the 11th century.

provides the public with information on current events in the Chamber of Deputies as well as on the functions and bodies of the lower house of the Parliament.

Register of Disclosures by Deputies

Information System of the Parliament

allows getting e-mail on the current actions in the Parliament.

Information for journalists with an official accreditation in the Chamber of Deputies.